Italy Food Culture
Goat Cheese
To Try or Not To Try ?

A part of the island's food culture is this goat cheese that has quite an original way of being produced and is certainly considered as on the the Islands most bizarre foods.

I want you to take a good long look at the image and tell me if you can guess exactly what it is that is staring at you.

Come on..  no cheating don’t scroll down until you have at least one idea of what this could be.

Italy Food Culture
What is this Bizarre Food? 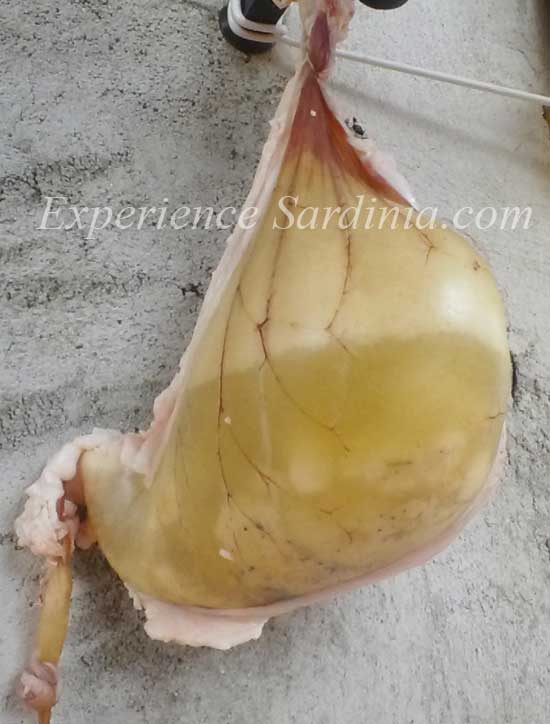 Time to let the cat out of the bag...

This strange Italy food culture is a baby goats stomach !

Mmmmmm! and appealing  or

Everyone has the right to express their thoughts and personally I find this Sardinian delicacy an absolutely tasty cheese.

So exactly what is it.

This type of goat’s cheese is called in the area where I live Calgiù.

The image above shows a freshly hung Calgiù that still has a couple of weeks to dry out to the perfect consistency before being ready to eat.

This delicacy is only made with goat’s stomach for the simply reason the newly born goats do not eat grass in the first few months of life but only their mother’s milk.

They are usually slaughtered when they are about  two and half to three months old, weighing anything from 7 – 9 kgs and before they start eating grass so that when the animal is slaughtered the stomach only contains milk.

It is made in two ways:

The first is by taking the goats stomach, knotting it up and leaving it hanging up to dry usually protected with a net meshing to protect it from the flies.

This procedure is the more natural and authentic way of making calgiù. The only downfall is the when it is ready to eat, apart from the fact it is usually stronger in this version you we also find goats fir mixed in with the cream cheese.

Most of the Sardinian’s don’t really have any problem with this they just pick out the fir and munch away on it. 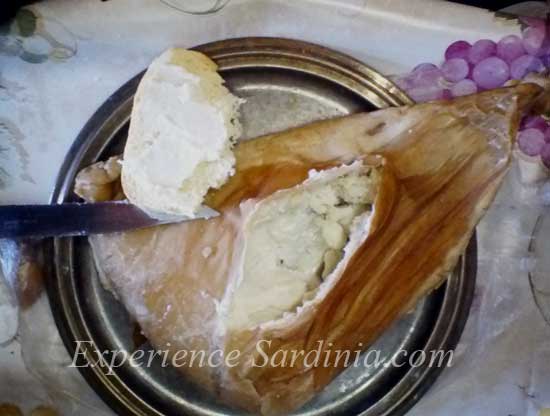 The other way of making it is, as soon as the goat’s stomach is removed the milk inside it  is emptied and sieved removing all the fir and then it is poured back in to the goats stomach.

Depending how much milk was in the stomach at times some shepherds add some freshly milked milk to it, resulting in a slightly milder flavour.

The lining of the goat’s stomach contains enzymes that naturally cot the milk turning it into a cream cheese.

I must admit it took me awhile before I took the plunge to actually taste it.

Now my husband’s fuming that he insisted on my trying it because I simply can’t resist it when there’s any around.

My grandma always used to make me laugh bless her, she would al say “Pagu pagu, po sa digestioni” which means, “just a little bit to help the digestion!”

If you ask me it was just a good excuse to eat it as she said this to just about all foods that she wasn’t really suppose to eat!

Although many including myself eat this cheese raw,  once all the creamy part of the stomach has been nearly polished off, the remains are used in making one of our favourite goat cheese recipes.

We place what what's left of the stomach in a frying pan adding milk, sometimes eggs, heating it all up stirring at the same for a elongated version.

Think you seen it all now?...  not quite here's another one of the Islands bizarre foods, how about some strong creamy cheese riddling with a few maggots here and there?